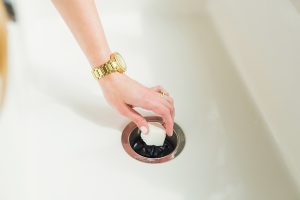 Many individuals often ask the question “Is a garbage disposal in a sink as dangerous as it seems?”

A garbage disposal is thought to be dangerous due to the grinding parts (such as blades) it comes with.

But, no, it isn’t as harmful or dangerous as it seems. Most of these units on the market today are highly friendly, and them being harmful is highly a rare occurrence.

Of course, their blades are sharp and at times they might cut off your finger; if you place your hand in one.

But if you know how to use them, and have taken the recommended precautions, before you use them, then you don’t need to worry about these units being a danger in your kitchen.

The Main Dangers of Garbage Disposals

Although in rare situations, these units still possess the following dangers:

One of the primary dangers with a disposal is the occurrence of an electric shock. The device is designed to work in the presence of water and uses power to function. In addition, the unit produces some form of vibration when operating.

Over time, these three factors (power, water, and vibration) may cause the power connections to get damaged and this might increase the chances of an electric shock.

As you are often washing metal items like utensils in your sink, this even increases the danger of electric shock. The possibility of shock even increases when the motor begins to burn out, so it’s vital that you get your device inspected regularly by a professional plumber.

However, if you are renting a house or are currently leaving in a rental on business or holiday trip, then you may assume that the disposal has been inspected.

The garbage machine might also administer a shock when you are installing or replacing it. Therefore, it is important that you hire a professional to fix your gadget.

In addition, don’t try to fix your unit when your hands are wet as this might also lead to an electric shock or another injury.

The other danger associated with these units is the issue of septic hazards as well as the resulting bacteria. Your garbage disposal unit increases the amount of organic material that you flush into your septic system and sometimes this system may get overloaded when there is lots of waste going there.

When this occurs, the water that is in the system may begin to leak out of the pipes. In some situations, it might even bubble up onto lawns or even clog the plumbing system inside your house.

Due to this, the septic waste begins to seep into the surface, adding harmful bacteria to the surface water table. This might create illness and even be quite unsanitary.

If you intend to put food down your disposal device, it is important that you inspect your septic system regularly to ensure that everything is running smoothly. If it isn’t working smoothly, then consider hiring a plumber to repair it as soon as possible.

Another great danger with garbage units is the chance of a laceration. In most rental homes, hotels, as well as other places with these devices, it is critical that there is a sign that warns individuals that they shouldn’t put their hand in garbage disposal at any time. Even when the system is off, the sharp blades might cause lacerations that might be quite painful and need emergency medical attention.

One of the greatest dangers from a disposal unit is under or unsupervised kids and the possible injuries to them. As much as these devices are the danger, the blame should also fall on the parent as well.

Disposals might lead to horrifically maiming injuries to children’s legs or arms. When there are children in your home, it’s always advisable to go for the batch feed machine, as this is safer than the continuous feed disposal.

A batch feed system comes with a stopper, which has to be switched on before it starts to operate.

In addition, many people often drop their items to the grinding system accidentally, and for them, the batch feed system might be the best one, as the system is easy to stop and the belonging might be retrieved from the chamber.

These systems are also preferred for quieter operation, which is the opposite of the continuous feed garbage unit.

With that said, never allow your kids to play in the sink with a disposer as they might be tempted to put their hand down the system without realizing that they are putting themselves in danger.

Garbage disposers are safe if used the right way. Therefore, if hope you have gotten a helpful answer of “is a garbage disposal in a sink as dangerous as it seems?”

It is the same question for lawn mowers and weed whackers about the safety aspect. Take the necessary precaution and you will not be in danger.